The Azolla Cooking and Cultivation Project at Kaalstaart (2016) 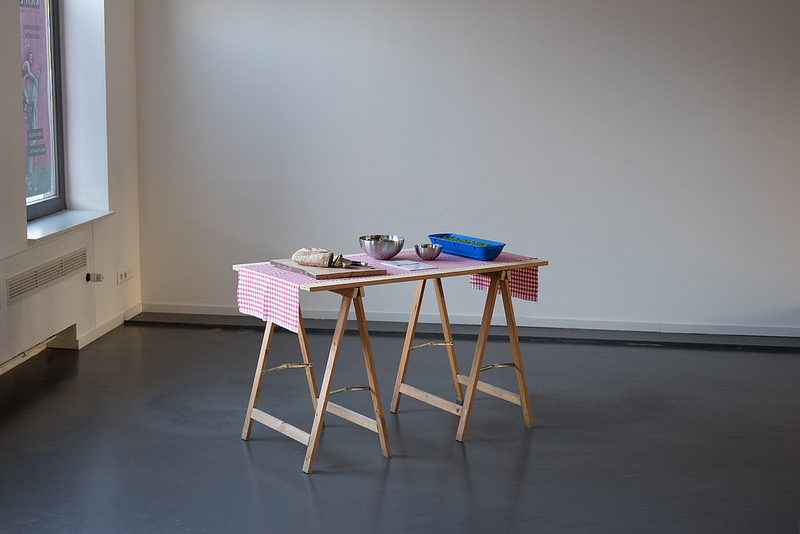 
During the Kaalstaart festival in Amersfoort (NL) artist and researcher Erik Sjödin did research on cooking and cultivating Azolla together with The Collaborative University of Amersfoort and Elsenburg Bakery using Azolla grown in Utrecht Botanic Gardens by researchers at University of Utrecht.

The result of this collaboration was an Azolla sourdough bread which tasted good, but not decidedly better than a regular sourdough bread without Azolla.
Nevertheless, Azolla adds nutrients such as minerals, vitamins, and proteins to the bread, which could motivate the use of Azolla in bread and other food for reasons other than taste. However, it should be noted that Azolla might contain neurotoxins produced by cyanobacteria. If Azolla is healthy or not to eat remains an unanswered question.

Another result of this collaboration is that Diana Wildschut from The Collaborative University of Amersfoort managed to reproduce Azolla by paring male and female spores under a microscope. Azolla has not been bred for taste, which most plants used as foodstuff have. Reproducing Azolla sexually from spores is a prerequisite for breeding varieties of Azolla that taste better (without using gene modification).

The Azolla in the installation at Kaalstaart was grown at Utrecht Botanic Gardens and harvested by Azolla researcher Paul Brower at University of Utrecht. Paul Browers research “aims to develop transform Azolla from a weed/pest into a crop for the the production of sustainable food, fuel and/or chemicals. To do this we need to solve various hurdles. Firstly we need to understand its sexual reproduction to enable the production of starting material for cultivation. Furthermore we investigate its growth speed and nitrogen fixation and the response thereof to different environmental conditions. Lastly we try to develop processes to produce sustainable products from the generated biomass. Due to its high protein content we have been interested in the production of animal feed. In particular we try to develop protein extraction processes to produce high quality animal feed locally and thereby replace imports of soybean meal.”

The plants supplied to the Azolla Cooking and Cultivation Project were freshly harvested from cultures grown in the research facility of the Utrecht Botanical Gardens that are maintained there to provide sufficient biomass to perform, among others, these protein extraction experiments.

The Azolla sourdough bread was baked by Elsenburg Broodmaker in Amersfoort. A bakery that specialises in organic sourdough bread. The bread was made with approximately 20g of dried and grinded Azolla for two loafs. Which was plenty for tasting the Azolla. The Azolla also affected the dough somewhat making it stick together a little bit less, but it still baked well.