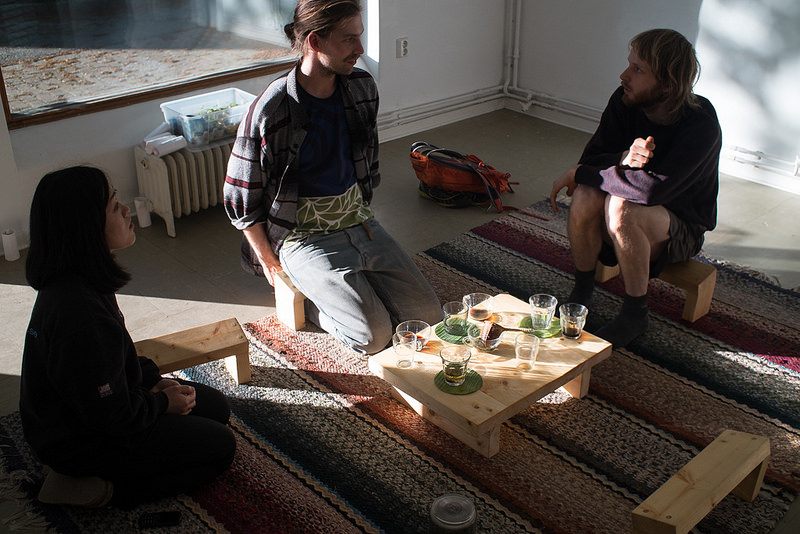 Hot Beverages was a one day event in collaboration with artists Ami Kohara and Matti Sumari. Together we turned Cigarrvägen 13 into a tea room and served Shiso, Azolla and Chaga tea. I contributed with Azolla tea, furniture I’d made from material recycled from The Azolla Cooking and Cultivation Project. My living room rag rug and a photograph. Ami Kohara brough shiso plants, tea cups, pots and other utensils. Matti Sumari brought Chaga tea, a Chaga mushroom and a video.

The Chaga mushroom (Inonotus obliquus) is found on birch trees wherever they grow. The fungus is a parasitic species on birch trees and this lethal infection causes black, swelling outgrowths. These tumors have traditionally been used as tea, foremost in Russia. The tea is believed to have healing capacities, first introduced to a wide audience in the West through the Nobel Prize winner Aleksandr Solzhenitsyn’s book Cancer Ward. During the last few years, tea made from the chaga mushroom has also been launched as an expensive food supplement and can now be found in health food stores. Scientific research has shown the tea to have anti-inflammatory and anti-­tumor effects on humans. Through various projects Matti Sumari has been exploring what this wretched tumor can tell us. In the kitchen next to the tea room Matti showed a video from his work with Chaga in Umeå, the “birch city” in northern Sweden.

Azolla (Azolla filiculoides) is a water fern that grows on water surfaces in temperate and tropical regions. It is one of the world’s fastest growing plants and a rich source of nutrients. Azolla is not commonly eaten today, but it has been suggested by Japanese Space Agriculture researchers as a potential food stuff for future Mars settlers. Departing from this research Erik Sjödin has since 2010 explored how Azolla can be cultivated and cooked. Among other things he has concluded that dried Azolla quite successfully can be used for tea. The healthiness of eating or drinking Azolla is not well investigated. However, Azolla is used as a traditional cough medicine in Tanzania and it has been shown that cows that eat Azolla increase their milk production. There are some concerns that Azolla may contain BMAA, a neurotoxin that has been linked to neurodegenerative diseases. However, BMAA can also found in many common sea foods, for example Swedish clams, and is only toxic in large quantities. The furniture in the tea room was made from wood recycled from structures made for Azolla cultivation for previous exhibitions.

Shiso (Perilla frutescens) is an Asian culinary herb which is a common food stuff in Japan. Shiso has been purported to have various beneficial qualities. It is used for a variety of conditions related to the respiratory system including asthma, nasal inflammation, and congestion from allergies and colds. It is also used to treat gastrointestinal conditions such as vomiting and morning sickness. Additionally, Shiso is said to promote a healthy immune system. In Asia Shiso is an ingredient in summer teas which are used to replenish energy and fluid drained by the summer heat. The Shiso tea was brewed by Ami Kohara who also had cultivated Shiso seedlings that the visitors could bring with them home. Ami also folded experimental tea pots / sculptures out of paper. 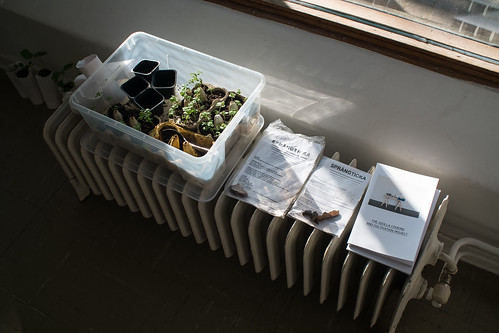 Thanks to Ami Kohara, Matti Sumari and Ciggarvägen 13.