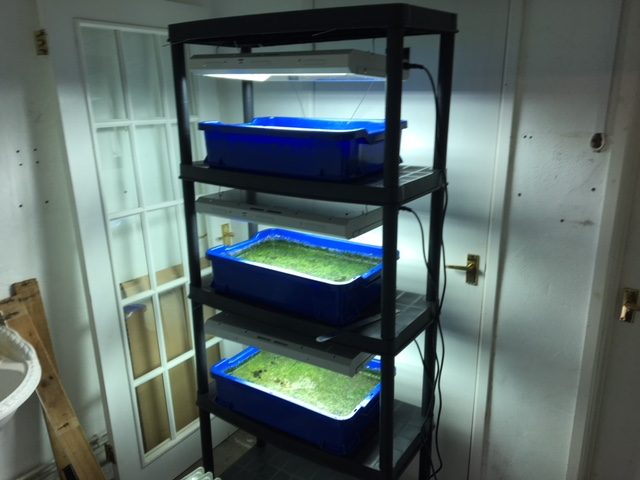 In preparation for participating with The Azolla Cooking and Cultivation Project in the exhibition ‘The Land We Live In – The Land We Left Behind’, curated by Adam Sutherland at Hauser & Wirth Somerset in England Erik Sjödin is currently working with the the gardeners and technical staff at Hauser & Wirth Somerset in an attempt to develop a functional solution for cultivating Azolla in the exhibition. This is a challenge both due to the winter season, which requires Azolla to be grown indoors under artificial light, and the local water, which may not be ideal for Azolla cultivation.

Azolla is native to warm temperate and tropical regions. It was introduced in botanical gardens in the UK in the late 19th century. During the 20th century it became increasingly popular as an ornamental pond plant and also began to appear in the wild.

The Azolla grown in the exhibition has been supplied by a local pond enthusiast who knew where to find some Azolla in Somerset. Azolla regularly appears in waterways such as ponds and canals in Somerset. In the summers sometimes growing to the extent that it becomes a weed that has to be removed. Because of Azolla’s fast growth rate and invasiveness it can cause serious disruption of water ecosystems. Since 2013 it is therefore banned from being sold in the UK.

The rig above shows a backstage cultivation at Hauser & Wirth Somerset, which we have been running for some weeks now. Initially the Azolla was growing really well in this arrangement. However, when the Azolla was split from one into three trays it was overtaken by a rapid algal bloom and turned into a green ‘sludge’.

Given the right light, nutrients and temperature conditions algae can grow very rapidly and consume nutrients that plants such as Azolla needs. As algae bloom, die and decompose, they also remove dissolved oxygen from the water, which impact plant roots. Some blue-green algae (cyanobacteria) produce toxins that are unhealthy for humans and animals to consume, both directly and indirectly through other plants. It is also possible that blue green algae can produce toxins that impact plant growth negatively, although this seems less studied.

Since algae can’t grow without light we are now resolving this issue by making sure that water surfaces which are not covered by Azolla are not exposed to light. Hopefully the Azolla will recover decently in time for the exhibition opening in mid January, but we will also continue to work with the Azolla cultivation during the exhibition period. While this algae outbreak was a mishap, it is also a learning experience which will inform further research on Azolla cooking and cultivation.